Six or eight of us were planning to explore some of the Chassahowitzka Swamp yesterday Sunday, but instead a whopping thirteen people showed up! Our quarries were sinkholes that extend like a string of pearls along an on-again, off-again clear water karst stream called Blind Creek. One group wanted to snorkel the sinks, another wanted to photograph the nature of the place and a third group preferred to explore for outliers. I guess I should also mention that Bruce felt responsible for the entire assemblage, so we let him get mad once when he finally realized that this collection of cats, including a couple of us ferals, simply could not be herded.

The first stop was at Buford Spring and Buford Siphon. These two sinkholes are connected via a short segment of Blind Creek, the water resurging at the spring and disappearing into the ground at the siphon (naturally). Although the water looks dark in the photo, and it is partly tannin-stained, it was clear enough underwater for snorkelers to see the sink’s bottom and spring cave entrance. Later, we encountered two cave divers from Maryland that dove the spring using rebreathers. I never dove this site when I was a cave diver even though I share its uncommon name. The photo shows Manuel (red-and-black) and Alan tripoding up for some photography, plus a wood duck nest box with raccoon excluder. 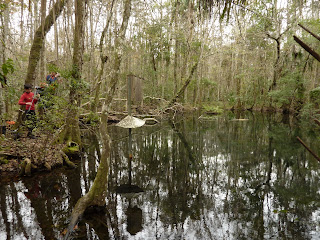 From there, James and I walked NNE about 0.13 miles to Brown’s Sink, named for James by Tom Morris but possibly known by other cave divers under another name. Its water also appears relatively clear from above, but none of the Sunday group swam there so I don’t know whether Brown’s Sink has a cave dive. James said that yet another sinkhole was a little further northward in the swamp, so off I strode to try to find it. I walked a third-mile loop to the NE without finding the sink, so circled back to Brown’s Sink but James was gone. I then walked back to Buford Spring and everyone was gone. Hmmm, alone in the woods… How to find them? I figured that the snorkelers were probably cold and ready to head back, so I started walking back to the parked cars, and then decided to try and use the cell phone to call Alan even though I felt certain that we were out of range of the cell phone towers. Nope, I reached Alan’s voice mail and left a message, and he called back a few minutes later to tell me they were at Warm Spring. So I turned around and took a compass direction based on the GPS and struck off, and danged if I didn’t serendipitously encounter James waiting patiently for me at Buford Siphon. The need for better communication became evident.

Warm Spring is the resurgence of Blind Creek downstream from Buford Siphon. It was the largest sink we encountered that day, and again the water was far clearer than the photo might indicate. In case you are wondering, no one saw any alligators Sunday in any of the sinks even though the habitat looked right for monsters. After swimming there, the students of geology and archaeology had had enough and walked back to the vehicles to leave. Bill and John accompanied them back, leaving only six of us to continue the day’s explorations. 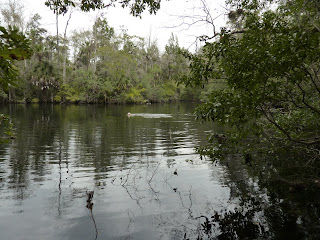 We followed the clear-water spring run NW from Warm Spring to a sink I call Warm Siphon (formerly Pool 7 to those who were there on Sunday). Most of the water appears to sink into the siphon, but a small portion of it overflows and continues in a NW direction. Here it separates into a defined channel and a broad region of shallow braids, all of which goes through a slightly deeper section of the Chaz Swamp. The small stream finally goes to earth in a linear sink containing one or more small swallets, which we named Mitis Swallets. Some of the guys still had not seen Brown’s Sink, so we made a beeline there for more photography and then walked back to the cars.

Walking through the Chassahowitzka Swamp is not easy. First, the swamp is permanently wet, so we wore neoprene socks (two pair for me), boots and polypro thermal underwear bottoms. Most of us were wet up to mid-thigh for the day even though we were seldom in water deeper than 6 inches. The quaking earth is soft or very soft everywhere, being composed of silt and organic detritus. If too many people in your party walk a path ahead of you, you will often suddenly break through the root mat and plunge down into the mud another unexpected foot or so. Tie those bootlaces tightly! Cypress knees and sweetbay root loops rise up out of the mud, blending cryptically into the background leaf litter and tripping the unwary gawker, or in my case banging the crap out of my knee and crippling me during the late evening. Ouch! I walked only 5.5 miles through the swamp on Sunday, but the mud and the cold water and the roots wore me out. Oh, but it could have been worse! There could have been lianas to trip over, pesky mosquitoes to swat incessantly or pickup-stick logs to maneuver over and around, but there weren’t. There could have been a whiner, because after all there were thirteen of us, but other than Bruce’s exasperation there was not. 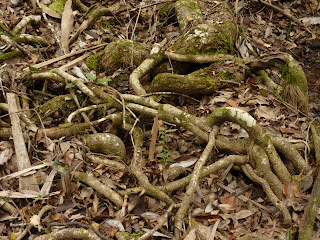 We saw some neat flora and fungi, of course. Nodding nixie (Aptera aphylla) was occasional. I have seen it blooming around here from summer to mid-winter. Alan spotted several individuals of Florida adder’s-mouth orchid (Malaxis spicata) scattered around singly, not in bloom but seeding. Fragrant ladies’-tresses orchid (Spiranthes odorata) was commonly sighted, again thanks to Alan’s attentiveness, and I got a pic of one of them, below. Also blooming were swamp aster (Aster carolinensis), an unid blue-eyed grass (Sisyrhinchum sp.) and Spanis needles (Bidens mitis). Mitis swallets was named after the Spanish needles that were blooming there. There were many species of ferns in evidence, including macho sword fern (Nephrolepis biserrata), plume polypody (Pecluma plumula), shoestring fern (Vittaria lineata), giant leather fern (Acrostichum danaefolium) and several very common species (cinnamon, royal, ovate shield, resurrection, lady and netted chain fern). There was a single patch of the invasive exotic Boston fern. Oh, and I flushed a pair of woodcocks! Apologies to the birds. 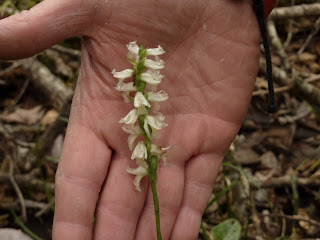 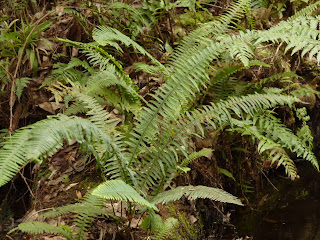 And saving the best for last, Alan (there’s that name again) spotted a sphingid moth carcass that had been parasitized by an other-worldly fungus known as Cordyceps sphingus. This organism invades the living body of a moth in the family Sphingidae. You can barely recognize the moth in the pics below, with its head-body and wing remains covered over completely by the fungus’ yellow hyphae. The long spine-like things are actually the fungus’ ascophores, or fruiting branches, that bear the spores of the species. A sister species, Cordyceps militaris (http://www.nifg.org.uk/cordyceps.htm), parasitizes only pupae, and looks totally different from C. sphingus. Cordyceps is related to an ant-parasitizing fungus, which causes the ant to climb to the top of a shrub or tree, impale a twig with its mandibles and then die. The fungus then consumes the ant’s soft tissues and sprouts an ascophore from the ant’s head, from which spores rain down onto the bodies of ants scurrying below. 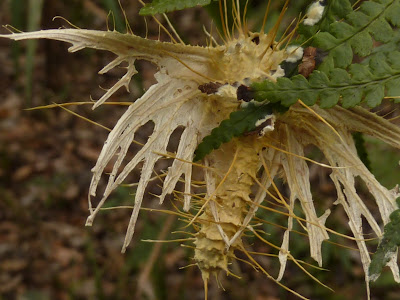 Now if you will excuse me, I have this strange urge to climb a tree and gnaw on a twig.
Posted by Buford Nature at 3:19 PM