It started out looking like bad weather this weekend for getting out into the woods, but Sunday turned warm and was essentially rainless. Brack and I took advantage of the weather window and headed to San Felasco Hammock State Park to continue exploring the SW part of the hiking-only section. We parked at the trailhead on Millhopper Road and headed mostly northward through the low and mesic hammocks mentioned last weekend, intending to explore a 10-acre karst depression to the immediate north. I was expecting the depression to have comparably interesting karst geology and flora as the lowlands did last weekend, but if not then the plan was to head off to the NE to a short valley that runs almost due north to discharge into Sanchez Prairie. And the latter is exactly what we did, taking the easy way back (hiking trails) back to cover a total of almost 9 miles.

As mentioned in my last post, this tract is part of the transition zone between the impermeable highlands and karstic lower elevations. Sinkholes here are constantly opening up and plugging shut. Take the “Dumbbell Sinks” example from last weekend where a stream and groundwater seepage originally drained into a pair of sinkholes. The west sink then became plugged with clayey sediments, causing the sink’s water level to rise and overflow into the east sink. A small sudden-collapse sink adjacent to the west sink more recently opened up and now takes surface flow from the west sink, and is eroding a channel that is small now but will surely grow wider over time. 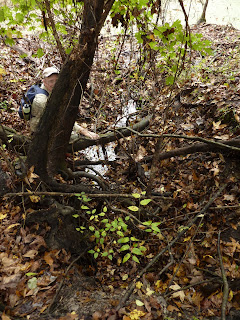 A little further to the north is a medium-sized sinkhole with a very fresh mini-collapse-sink at its south end. Clods of dirt are still falling into the new little pit. 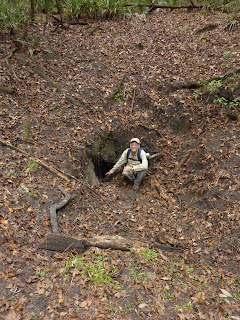 We encountered another, small sinkhole about 10ft deep with sides almost vertical, way too slick and steep to climb in and out of without aid, and too dark under a closed laurel oak canopy to be photographed. This sink looks like it collapsed opened within the last several years.

A very interesting part of the trip for me was seeing the above-mentioned short valley that enters Sanchez Prairie from the south. This valley is totally absent on the USGS topo and derivatives, including my Garmin GPS topo, but is depicted clearly on the Alachua County Fernandez Grant 2-ft topography. I call it Sanchez South Creek. We encountered it about midway along its mapped length and walked along it and a little ways out into Sanchez Prairie, following its incredibly sinuous stream. 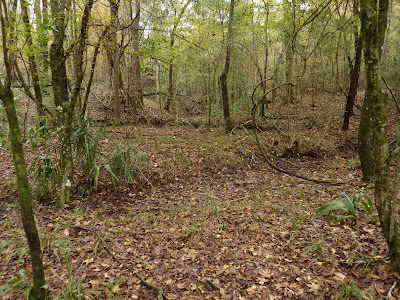 The photo does not do service to two things about the creek. First, it gives only a hint of one section after another of parallel, 30ft long sections of stream oriented perpendicular to the direction of valley flow. I guess that the ratio of perpendicular flow to parallel (to valley flow) is almost 2:1. The second thing the photo does not show is the damage by feral pigs. They have torn up literally every square inch of this streambed such that not a single plant can be found in the bed. How many species of plants are now rare here, or no longer occur here at all because of pigs? And what about the small animals that lived here, like crayfish and salamanders? Mostly eaten, by pigs.

It is truly disheartening to see nearly every square foot of San Felasco’s streams, sinkhole bottoms, wetland edges, currently-dry wetland floors and mesic karst valley bottoms thoroughly plowed up by pigs. Pigs are bad enough in so many wild places in Florida, but the situation may be worse in Florida state parks because pig hunting is not allowed and FDEP does not have an effective feral pig control program of its own. You and I, and the state’s biodiversity, suffer as a result. “I sho’ got to git me a remedy” (Marjorie Kinnan Rawlings).

In another place on the day’s trail, we both were struck by this life-laden log: 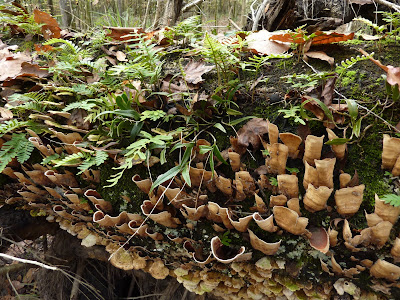 It supports turkey tail fungus, green-fly orchid, resurrection fern, moss and myriad invertebrates that woodpeckers dine on. And you know why it is covered with plants and fungi? Because feral pigs can’t reach it!!!

Geology isn’t the only thing changing in San Felasco. Check out this huge live oak. It is a former Florida Champion Tree, more than 9ft in diameter, but its end might be near. You can see two limbs have died and fallen off it, including one that may have supported a quarter or a third of the tree’s leaves. Bob S showed it to me in the late 1970s or early 80s, and that big limb was alive then. 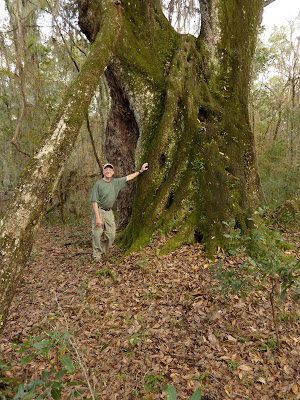 During these San Felasco explorations, I am obtaining waypoint locations for all the sinkholes encountered, and am up to almost 80 in number. I hope to eventually get enough of these sinks mapped that the patterns of lineaments and karst features begin to form a bigger picture of San Felasco’s hidden hydrology.
Posted by Buford Nature at 12:21 PM