Last Sunday, I explored the woods in the SW part of San Felasco Preserve State Park, parking at the Millhopper Road entrance and hiking a total of about 9 miles. I had been in that region of the park before and had marveled at its wetland sinkholes, but I didn't really know exactly where they were. Available topo maps are based on the USGS Topo Quad, which does not depict several of the streams or the actual extent of wetlands there, and in one location there is a sinkhole pond rather than the mapped hillside. It did not help that I previously did not have a GPS unit with me, either. Google Earth aerials of the park are of little help because their photosignatures show only whether an area is dominated by deciduous trees or evergreens. As a result, mesic slope forests and wetland planer elm forests appear nearly identical.

This time I had the GPS, but what’s a fellow to do about maps? I compromised and packed an aerial, a topo, a park trail map, and then got an idea for a fourth map. I focused on the area of interest using Google Earth aerial photos, over which I overlaid a two-thirds transparent topo from GPS Visualizer dot com. Unfortunately, the topo overlay adds green color to the aerial, but not too badly. If you have not yet tried working with GPS Visualizer topographic overlays onto Google Earth imagery, I urge you to do so.

San Felasco is transitional between the Northern (impermeable) Highlands and the Williston (karst) Plain. On the highlands, streams flow into rivers that flow into the sea. The karst plain has essentially no streams; its drainage is internal to the limestone directly underneath, which eventually vents as artesian springs that flow to the sea. The transition zone is where streams can discharge into either sinkholes or rivers, where springs may be artesian or surface seeps, and where spring runs can flow into either sinkholes or sea-bound streams. In short, drainage is unpredictable, and thus most interesting! Many of my caving buddies pretty much eschew San Felasco because of its poor caving potential, but that doesn’t mean it’s a boring karst landscape. It means that until you have seen it all, you don’t know what karst features you might have missed. Obviously, thorough field “work” is in order!

Sunday’s walk started in laurel oak scrub, but the trail quickly pops out of that onto the main loop trail. I went counter-clockwise from there to a forest dominated by loblolly pine with a hardwood understory. Probably, this will one day be a hardwood forest: 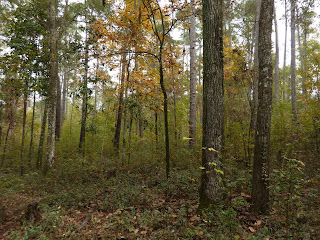 Soon I was lured SE off the trail by a small sinkhole, and then followed its now-dry feeder stream a short distance to the upper edge of a slope where several seepage springs issue at the contact between the impermeable Hawthorne sediments and the porous sandy soil. These seeps had healthy discharges into a couple of small drains that combined to form this tiny stream: 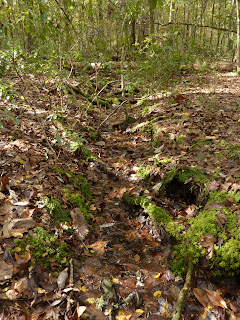 Which quickly enlarged to this: 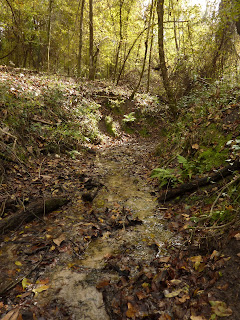 And then sank at this point (you can barely see surface water in the stream in the middle of the picture), completing the transition from seepage spring to surface stream to sinking stream in a sinkhole: Continuing north past the sinkhole that swallowed the creek, over a sill that appears to be breached during high water flow when the sinkhole can’t take all the stream discharge, you come out onto what I call Planera Pond A, named after the dominant plant, the planer elm (Planera aquatic): 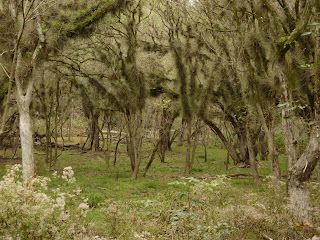 How about those bromeliads? They are mostly Bartram’s airplant (Tillandsia bartramii). Oddly, Spanish moss (T. usneoides), our commonest Tillandsia, is absent!

The NE corner of Planera Pond A has a tiny, then-dry tributary drain that I followed upstream to a small sinkhole wallowed out by feral pigs, then continued along yet another drain connecting the latter sink to still a third, dry sink. From there I walked north to an interesting karst feature. It is a polje with two sinkholes connected by an inundated slough that becomes a stream as it approaches and discharges into the east sink, and having a second stream entering the polje from the NE that discharges into the east sinkhole pond also. Obviously, the east sink is where all the water goes, right? Nope. At the SW edge of the west sink is a fresh-looking, 5ft wide by 4ft deep sinkhole that was receiving overflow from the west sink. So this system has an older (east) point of discharge that may be being replaced by a newer (west) swallet. This is what the east sink pond looks like: 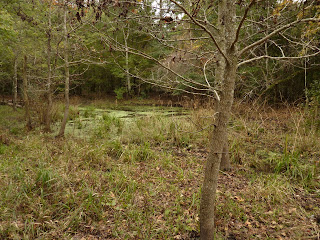 I followed the east sink’s second stream as it headed almost due east, becoming a well-defined ravine like the first stream mentioned. Curiously, the north side of the ravine exhibited essentially no seepage whereas the south slope was a seepage slope from end to end, yet the topo and my eyes both said the two slopes had equal elevation. Some of the seeps have sufficient flow to form picturesque, steep, fern-lined channels in the Hawthorne clay: 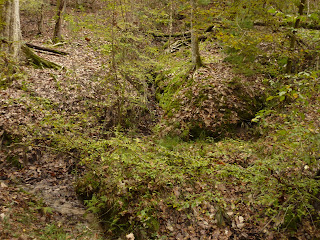 After that, I took the loop trail to look for more transitional karst and found a few more items, but nothing of note. One part of the trail that I particularly liked was this mature longleaf pine forest, which is obviously burned regularly to keep the hardwoods at bay: 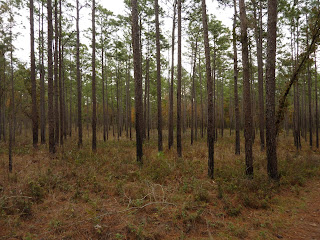 Posted by Buford Nature at 9:13 PM