Hughes Island is in the Ocala National Forest. Unlike your garden variety of island, this one is not a spot of land within a water body nor is it even like a hammock, which is an “island” of evergreen trees in a “sea” of something else. Hughes Island is 800+ acres of sandhill vegetation within a sea of sand pine and oak scrub. What makes it an island is that its plant community is noticeably different from the surrounding plant community.

There are several of these sandhill islands in The Ocala, but for some reason unknown to me, Hughes seems to stand out when Florida naturalists talk about them. It isn’t the largest or smallest and I don’t know that its flora and fauna are any different from the others. It is well-defined on aerials, being the circular, light-hued feature in the center of the photo sporting a bull’s-eye comprised of oak hammock and bayhead habitats: 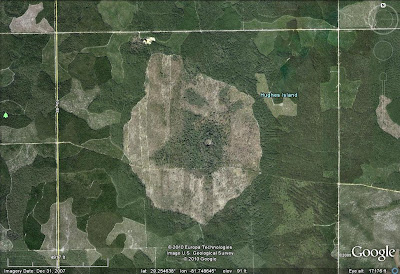 It has been a few decades since I visited that bull’s-eye. It contains the national champion loblolly-bay tree (Gordonia lasianthus), a species of the tea family with showy, 4- to 5-inch wide white-and-yellow flowers: http://tinyurl.com/yjrao9y. Ordinarily a denizen of seepage slopes, the loblolly-bay is gaining increasing popularity in home landscaping due to its glossy evergreen leaves, compact narrow crown and attractive inflorescence. The plant flowers over a several-month period in summer and then its leaves turn bright red a few at a time during late summer and fall, adding to its attractiveness. The champion tree is a magnificent specimen almost 6ft in diameter at chest height if memory serves correctly. Back then, I found two younger, slightly smaller loblolly-bays side-by-side at the seepage edge of a floodplain located a little closer to home, and I suspect those two forest giants may still be recognized as the second and third largest individuals of the species.

Linda and I drove to Hughes Island yesterday to look for Lewton’s milkwort (Polygala lewtonii). She had a printout of some known GPS locations that we used to locate a few plants to study to establish a “mental search image.” We then spread out and soon began finding more of them, and I’m happy to report that they appear to have a healthy expanding population here. Linda picked this week to look for it because she knew it would be in bloom this month. I was able to get a few decent photographs of this small species, which seldom reaches a height of more than 6 inches. 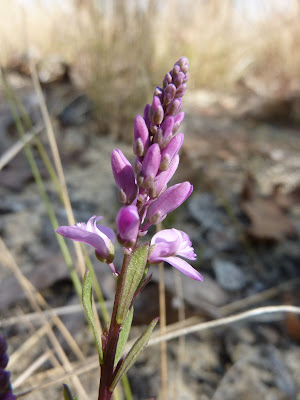 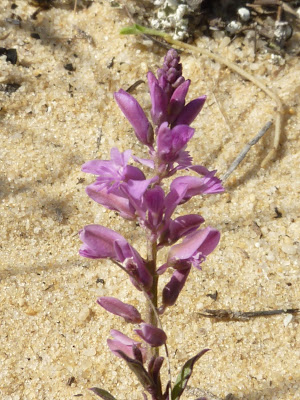