I couldn't raise the troops for a trek into the Chazz Swamp, so I went there solo on Saturday. It's about a 1:45 hour drive thanks to all the schlocky podunks from Inglis on south to just north of Thresher Road where one turns west to enter the Chazz WMA. The limerock road you turn into is actually named Indigo Road, but there is no sign for that at US 19. I paid my three bucks and drove on in. The goal was to get an idea of the terrain north and east of where I have been before, to check out the so-called Sink 311A that was named by some cave diver and to look for more karst features yet unknown to me. Here is what my 5.1-mile dayhike looks like on Google Earth: 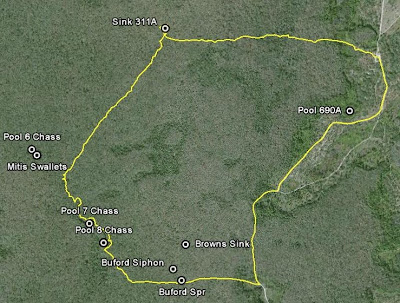 Some of my buddies have the idea to camp out in the swamp while on a 2-day wander around the place. I tried to convince them of their folly but they just called me a wuss. Harumph! These photos, which are typical in every way of the Chazz Swamp, should convince anyone that camping there in tents and sleeping bags is an odd idea. 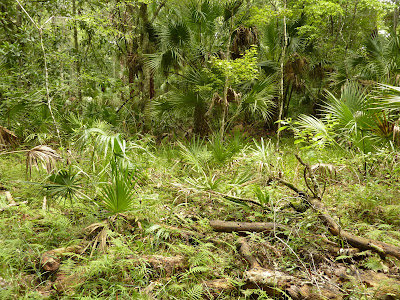 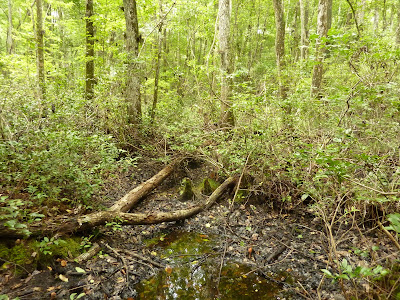 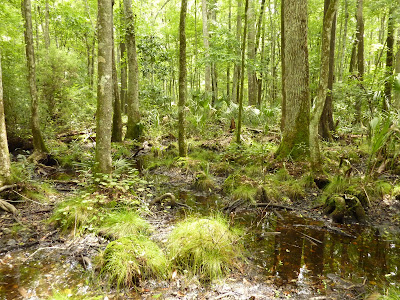 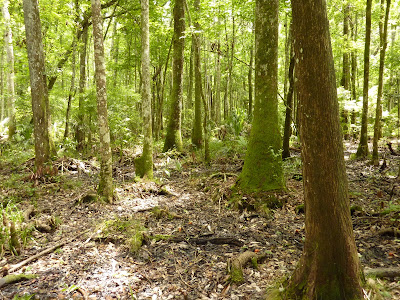 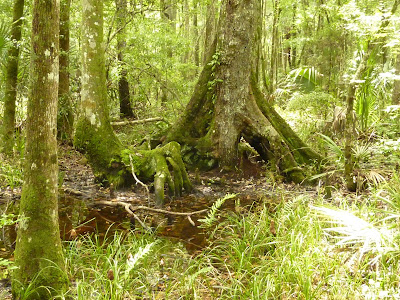 But there are some neat things to see there, like cabbage palms cloaked with shoestring fern (Vittaria lineata). 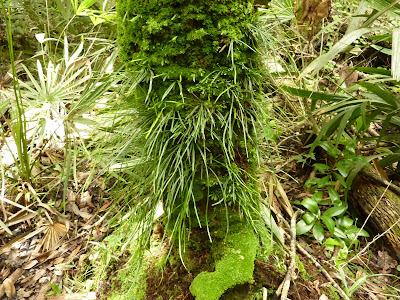 And a view of the clear waters of Blind Creek with snags and three young alligators sunning themselves. 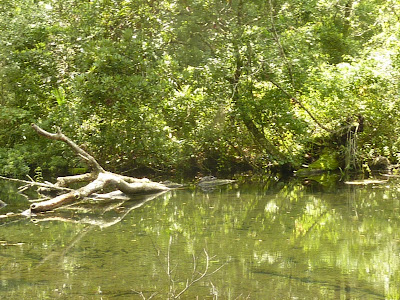 And Pool 8 (dunno its Christian name), with its limestone ledge above a sheer drop into cool, deep water. 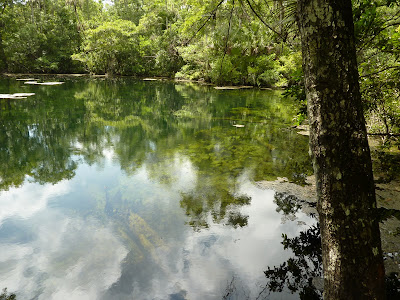 And this pair of unidentified blue mushrooms that have emerged from below thick leaf litter to look like alien blue eggs in a cupped nest. 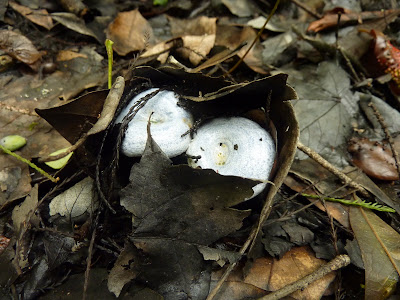 People talk all the time about cypress knees and debate what their function is, but I am just as pleased at the knees of other tree species like swamp tupelo (Nyssa sylvatica var. biflora) and sweetgum (Magnolia virginiana). 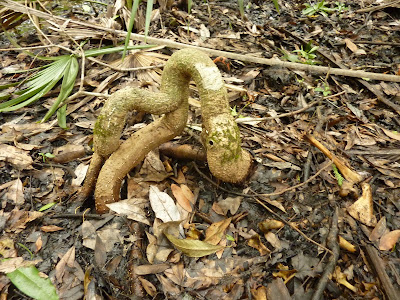 Did you notice the deer bones scattered to the right of the knees? I did not notice them until stooping down to snap the shot.

There was plastic flagging everywhere I went out there, red, orange, blue and candy-striped, plus three plastic balloons. So much for wilderness! OTOH, there was very little sign of feral pigs, perhaps because there is so little food for them this time of year. Other interesting biota seen included a striped mud turtle (Kinosternon bauri), beau coups corkwood plants (Leitneria floridana) and a terrestrial Habenaria orchid, possibly H. odorata, which we have seen blooming out there before.

Lastly, the prescribed burns that the State is conducting in the pine flatwoods and sandhill habitats are doing great things! Oaks and slash pines are being killed back, allowing for an abundance of ground plants for gopher tortoises to feed on. The burns will eventually result in a greater abundance of the large-seeded longleaf pine. Many of the herbs are in bloom and support diverse pollinators, and the longleafs will provide sustenance for the threatened fox squirrel. Gopher tortoise burrows were abundant, and goldenrod provided great swaths of cheerful color. I didn't even mind that I was soaked in perspiration and swamp water by the time I returned to the truck.
Posted by Buford Nature at 7:00 PM