This post is not about Florida nature, but that’s ok, right? I am in NC working on my house lot in the beautiful, cool-weather mountains of western North Carolina. My goal on this trip is to install a septic line from the septic tank to the inlet for the RV and electric lines from the road to the RV pad. The county requires the septic line to be emplaced by a licensed plumber. The only plumber I have talked to so far wants $1500 to lay a 70ft long line and I think that’s too much. I plan to get a couple more bids, but if that’s what it costs then I just may take the allegedly “easy” open-book exam and become a licensed plumber myself! That’ll go well with my hazwoper training, inactive real estate license and gopher tortoise agent certification. Think that’ll get me a cuppa coffee?

My goal today, Sunday the 12th, was simple, to stick a couple dozen wildflower transplants in the ground on the lot, and I did that but first had to deal with an erosion problem. It rained cats and dogs yesterday, and my driveway funneled surface water into some right places and some wrong places. The dirt at both ends of the culvert where the driveway crosses a first order stream got eroded away somewhat, not enough to panic but sufficient to require mitigation. I therefore felt it wise to spend about 5 hours this morning and early afternoon hauling rocks and green logs and shoveling water-saturated dirt around. All those things were heavy. My back hurts and my left arm is cramping even now, almost 6 hrs later, but here is the result: 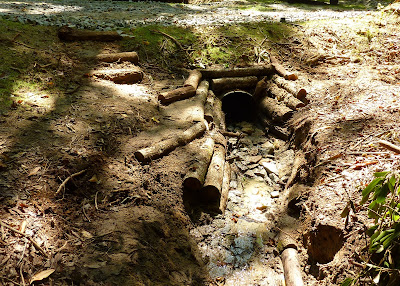 If you know anything about stream dynamics or erosion, you know that bulkheads seldom last for long, plus, ecologically, bulkheads are BAD because of the limited amount of wildlife habitat associated with them. But if you know anything about the biology of temperate montane rain forests, you know that mosses, ferns, wildflowers and roots will soon enough tie it all together in beautiful harmony, and there will be plenty of wildlife there.

I have spent numerous weeks lately working on the lot, clearing trees and shrubs, rolling up root mats, wandering around and turning logs and rocks and so forth, but in all that time I have seen only one small salamander and one ground skink. I have been wondering, “Where are the herps?” Well, working in the creek today I found out: they are all in the creek and under the root mat that was hanging out over the creek. I caught a spiffy ringneck snake today with a back as sheeny black as you could ask for, and with a bright yellow neck ring, but was myself caught up in shoveling, filthy and sweaty, and didn’t want to pollute my camera so let it go without photographing it. Afterwards I kinda regretted that, so when I caught a big salamander I collected it in a ziplock bag and brought it back to my home away from home (Uncle Dave’s place), photographed it, and tried to key it out. I think it is a Northern Dusky Salamander, Desmognathus fuscus. It is robust beast, maybe 5 inches snout to vent, and about 0.75-inch wide. I can’t tell if the tail is re-grown after being bitten off by a predator or if that translucent tail is just what they look like (that is not a water line on the tail; there is no standing water in the container other than a few drops). Later, I returned to where it was caught and released it.

I saw a couple more, smaller salamanders in the creek but didn’t try to catch them or photograph them.

Notice in the photo of my handiwork above that I have placed rocks in the stream bottom. What you can’t see is that I first placed a layer of irregular-shaped rocks on the surface of the gravelly sand bottom and then placed a second layer of flat rocks on top of the first. Hopefully, salamanders will be able to roam around between the two rock layers protected from most predators, making this excellent salamander habitat. My philosophy here is that if I am going to create a biologically bad bulkhead, then I have a responsibility to make what’s left into good habitat. I think that’s fair.

I hope to find a roadside ditch where I can collect some wetland plants to place around the bulkhead and side slopes, to give a head start to revegetating the scene. This will be harder than some of my Florida friends realize, however, because up here in the mountains there are no real road shoulders to pull over and park on. There’s just the asphalt, about 18 inches of grassy dirt and then a ditch. I’ll search around and find something though, it’ll just take some patience.

I’ll repair the other side of the culvert when my back and left arm recuperate. Groooan!
Posted by Buford Nature at 8:36 PM