I took a rather easy trip today to my favorite Florida state park, San Felasco, biking about 4.9 miles and hiking 2.6 miles. I would have hiked further but high waters in Sanchez Prairie kept me from my mission. I am in search of an elusive karst feature, a tall-grass pond that a stream flows into and then disappears into the ground below some large flat boulders that may actually be limestone bedrock pavement. I stumbled onto the feature twice, years ago. Both times I didn’t spend enough time deciphering its geology nor did I take photos of it. I have searched for it in Bruce’s company several times, once with Brack and a couple of times by myself including today, all to no avail. Annoyed!

This is a good mystery, however, and is guaranteed to keep seducing me back until I find it, even if it takes me umpteen trips to do so. It’s a good place to be, perhaps not as lucrative and dangerous a raid as an African tomb, but hey, I’m only a weekend warrior. Right? And there are other kinds of treasures along the way…

I rode my spanking new mountain bike eastward from the parking area to the power line R/W and then south along it to the gate beyond which bicycles and horses are forbidden, and stashed the bike in the oak-hickory-pine woods. This forest will ultimately staff up with many more hardwood species like Southern magnolia, basswood and winged elm, but alas, I must be resigned to American ash and redbay probably not ever making it due to the emerald ash borer and whatever fungus it is that’s killing off our Persea bays (redbay, swamp bay and scrub bay). Oh well, at least sweetgum is not especially common, and the trees here are nice and mature. Glass half full.

After stashing the bike, I walked over to the open water’s edge under the power lines where they crossed Sanchez Prairie to see for what wildlife might be visible. A rather loud barred owl was shouting “Wa wa wa Wacahoota!” Clearly, it was a plaintive cry to bring back that nearly forgotten whistle-stop along a defunct railroad that ran south of Micanopy, clearly to me, anyway. But there was another sound, a soft splashing in the shallow water only 100 ft away in the swamp. I thought it might be feral pigs rooting around the edge of the water, but it sounded too soft for swine, plus there was no grunting. I slipped quietly towards the commotion, crouching low as I went until passing beyond the forest edge off the R/W, and then I saw it! It was a river otter, cruising at an angle away from me, alternately under water and then breaching the surface for air and observation. I don’t think it saw me, but maybe. I was too far away to get a good picture of it, but this will at least give you an idea of its foraging habitat: 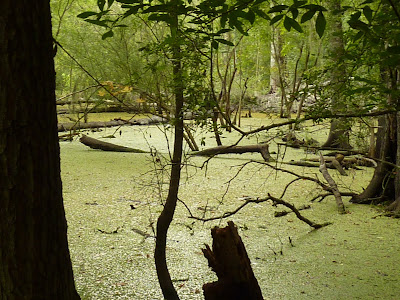 I waited until it was out of sight and headed back to the east to continue my mission. As soon as I entered the forest on the other side of the R/W five wood ducks flushed from the water, whistle-whining as they went in complaint of my presence. Last winter this area harbored perhaps a hundred woodies, and I suspect that many again will return this year. Only a few hundred yards further on, a handful of white ibis foraged unconcernedly in the prairie’s mud without taking flight at my intrusion. A great blue heron squawked a little further away. This photo will give you an idea of the park-like atmosphere landward of the swamp: 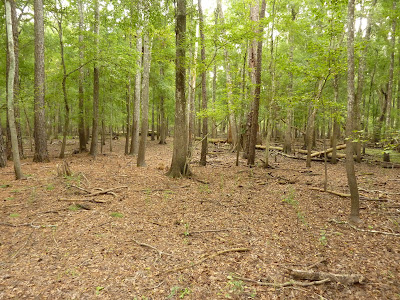 There is a lot of water in the prairie this year, much more than last year when I could walk across the R/W without getting my feet wet. There are too many large alligators in this prairie for me to chance a foot crossing at this time, though. Although the water is currently a little high, take a gander at the high water lines on these trees 4+ ft above the low hammock’s ground surface:

The north edge of the prairie has hundreds of 4 ft long white PVC pipes outlining what I think is a previous water’s edge a few inches higher than today’s. The pipes are appx 10 – 30 ft apart, and they sure do take away from the otherwise natural feel of the site. After the holiday weekend, I must remember to call DEP and ask why they are there. They are not at a jurisdictional wetland edge for sure, as I used to delineate wetlands and these are all well waterward of the legal lines: 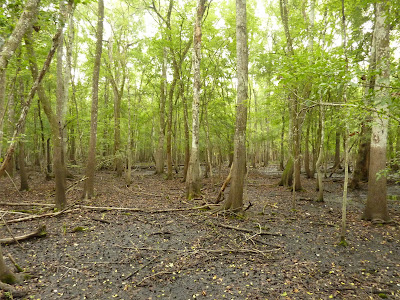 I only saw two deer. Wow. Usually many more are in evidence. A blue jay called in the distance, giving me the opportunity to practice my blue jay calls. I bet you didn’t know that I can almost imitate a blue jay, did you? Heh, but after 40 years of trying, I still can’t get it right. Blue jay calls are hard, so hard that I can’t remember how to do them unless prompted by a real jay, so don’t ask me to try it at your next party.

How about this spiral mushroom: 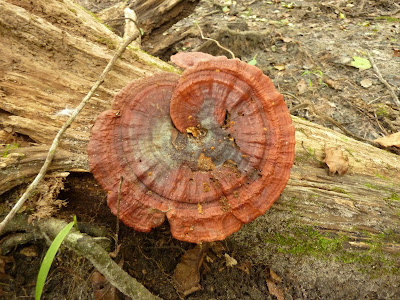 What may be Florida’s commonest milkweed, Asclepias perennis, always found on floodplains: 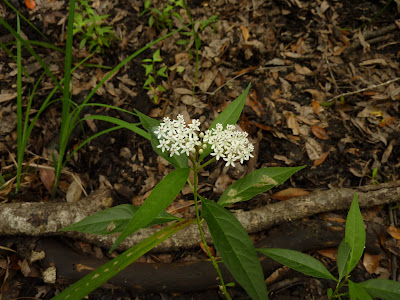 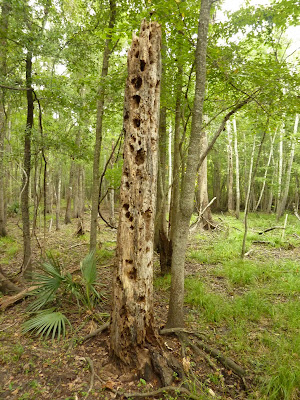 The river otter was a cool sight, especially coming at the beginning of the hike (harbingers!), but the last denizen of the forest I was lucky enough to spot was a water moccasin that was every bit as cool. Perhaps 2 ft long, it was coiled at the base of a tree among a set of fallen, small dead pines strewn about like pickup sticks. The serpent had the clouded eyes of one soon to shed its skin. It remained completely still throughout my photography gymnastics, never even testing the air with its tongue. Now that’s a calm snake! Or a sleeping snake? Even after I left and continued onward, when I passed back by 15 or 20 minutes later it was still there, still unmoving, still tight-lipped, an example for us all: 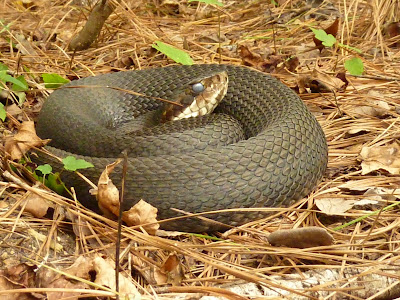 Posted by Buford Nature at 8:41 PM