I have mentioned a few times lately that I am improving my house lot in NC in preparation for building a summer home there. I have written but little about it here because it really isn’t about Florida adventures or Florida nature, but it has taken so much of my time lately and a few curious minds say they want to know, so I will indulge. Besides, if I don’t write about something, you will forget about my blog and that just won’t do. But I will be merciful and keep the story to just one or maybe two postings, which you can choose to read or not.

The project began out of a marriage of love for the mountain property and desperation over a lack of income, thinking that it was about time I finally developed the site and should do so while still flush with recent income. I knew it would be a race between running out of money while building the house in NC versus saving money by not paying rent at my RV space on the edge of Orange Lake in FL. I just hope that I can figure out how to save enough money on the building and lot improvements to keep construction going forward while finding some paying work as I go.

I focused first on improving the lot. Having a driveway and house/RV pad constructed was expensive, but I got bids from 6 contractors and was astonished to have them vary by almost a factor of two! The cheapest bidder was the one recommended by Uncle Dave, a former realtor who had contracted on behalf of other snowbirds and thus had a lot of experience dealing with local contractors. Having a lot of faith in Dave, I bought the cheapest bid and it proved to be the right thing to do, so I saved almost $10,000 right off the bat. So far, so good.

The main reason I focused on the lot rather than house construction was because I calculated that building a house would greatly exceed my savings. As I proceeded with lot improvements, however, Uncle Ralph revealed he was building a portable sawmill that would handle a 16 ft long by 42-inch diameter log, and that all I had to provide were the logs, gasoline, saw blades and half the labor. There were 8 white pines and several oaks of saw-timber size within the house pad and driveway that were sufficient to build a decently sized house. Then, when an arborist friend of Ralph’s found out about the sawmill, he offered Ralph literally a hundred tons of free oak, pine and poplar logs! We plan to use the pine for framing, oak for flooring and poplar for indoor and outdoor paneling, all for just the cost of sawing. Oh, man! So far, so good.

But several contractors told us that we might not be able to use my own saw timber due to county ordinances that address wood strength and wood-boring insect concerns. We noticed, however, that a lot of the advice was conflicting, so I went straight to the horse’s mouth – the county building and inspection department. At first, the nice young man quoted ordinance wording that was fairly restrictive, but there were conflicts there, too, so he put me on hold and conferred with the county engineer. When he got back to me, he said, “Look, we think a person should be able to use his own timber, so we’re going to work with you on it.” (Say hallelujah!) He said the most important thing is that the house lumber moisture content must be less than 19% and that we would have to beef up on the load-bearing timbers. He also said that they would advise us on the latter when I submit house plans. You know that would never happen in a large-population county. So far, so good.

The distance of the house pad from the closest power pole was too far for Duke Energy to lay underground lines for free. They preferred to erect overhead lines, but I was unwilling for them to clear-cut a 30ft wide swath through my beautiful mixed oak-pine forest, especially after clearing the driveway and house pad, so I sprung $2000 for underground service. As a friend taught me some years back, I consider this to be merely a “temporary inconvenience.” The electric contractor put up the power pole and circuit boxes relatively inexpensively, as did the plumber when running a sewer pipe from the pad to the septic tank. So far, so good.

Friday, the well driller installed a 6-inch well. It needed casing only to a depth of 33 ft, whereas the usual for this area is 60 – 80 ft at a cost of $5/ft. They found first water at 40 ft although the usual here is 60 – 120 ft and can be much deeper. They continued to drill down because a well that shallow can easily go dry during drought, taking it to a total depth of 125 ft. Most of the folks I have talked to said their wells were drilled to depths of 160 – 220 ft, so at a cost of $9/ft I think I got off pretty good. Also, most of the wells around here produce only 4 – 8 gallons per minute, whereas my first water produced 10 gal/min and the total inputs are estimated to be 20 gal/min. We joked afterward that perhaps I should start a utility company. So far, so good.

There have been a few disappointments, mostly being the interminable delays in getting bids, return calls and construction delays from contractors. Then there was the instance when the sewer line plumber cut the underground phone line despite me showing him exactly where it was located, because he was too lazy to halt digging with the track-hoe and “find” the wires using his two strong young men and their shovels. Aaarrggh! But the latter didn’t cost me any money and the delays only cost me my time, which is cheap now as I am unemployed. So, ok … fine.

The driveway has also been a problem. The soil here is clayey sand that becomes mushy when rained upon, so much so that heavy equipment cannot access the site unless it is very dry or paved with asphalt or gravel. Since the site gets 60+ inches of rain yearly and most of the work has been during a rainy period, “dry” didn’t work. Asphalt is very expensive and is crushed by heavy equipment anyway, so I opted for gravel. Actually, we don’t use what they call “gravel” because it is uniform in size and therefore acts like ball bearings, plus it would get smushed into the ground when driven or walked upon immediately after rain. Instead, we use what is referred to as “road bond,” which is every size (of gneiss, I think) between rock flour and gravel. These mixed-sized grains interlock when being driven over and rained upon, and if thick enough the material becomes almost as hard a surface as concrete. Anyway, after having a 2 – 3 inch-thick layer of road bond placed on the driveway by a contractor, Ralph and I have been repairing the driveway after each contractor comes and goes. For example, this week we filled his truck bed at the local quarry twice each on Tuesday and Wednesday and once on Thursday, and then hand-shoveled the material onto the driveway. Since each truckload weighed 3000 lbs, ahem, we each shoveled 7,500 lbs of sand and rock this week. My lumbar region is a bit sore today (Saturday), but … I’m gonna say it … So far, so good.

Monday, the well driller should return and lay underground water and electric lines from the pad to the well and get the whole shebang inspected by the county. Likewise, the county should also make the final inspection of the sewer line on Monday, thus completing lot improvement and preparation for house building, a milestone worthy of note! I will return to NC when Ralph finishes constructing the sawmill for the next phase – making boards out of logs and stacking and covering them so they can air-dry over the remainder of autumn and then winter. Come spring, unless I am broke or employed, I will start building the house. Below is a sample of photos taken during the last few months; hopefully, they will give you an idea of what has been done and how beautiful the forest is and the home will be.

Now, where is that new mountain bike of mine? Where are the biking trails? Is it cool enough to get back to caving yet? I think I saw some fall wildflowers back there somewhere begging to be photographed…

In the beginning there was an old logging road and leaves... 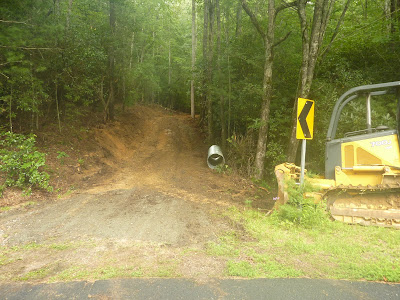 And I said, "Let there be heavy equipment and dirt:" 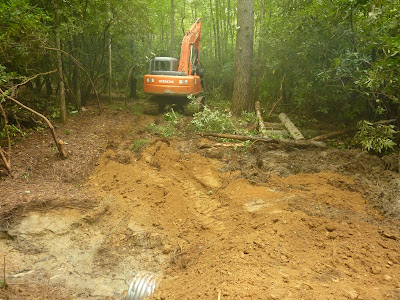 Installing a culvert in a tiny creek flowing over sediments that are saturated "all the way down:" 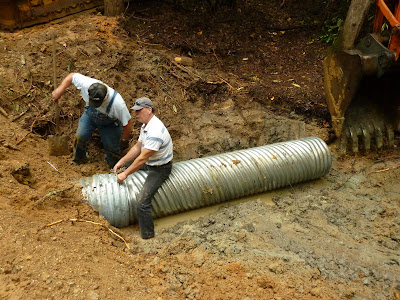 It seems a shame to log a 32-inch pine, but it will make a fine living room. Here is the pile of logs that it made (the large log on the upper right is 16 feet long and the one on the lower left is 12 ft long): 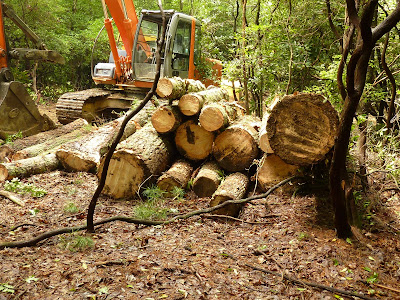 This view is from the downhill side of the same pile of logs looking up toward the house pad and front yard on the upper left and the "greenfield" septic drainfield on the upper right: 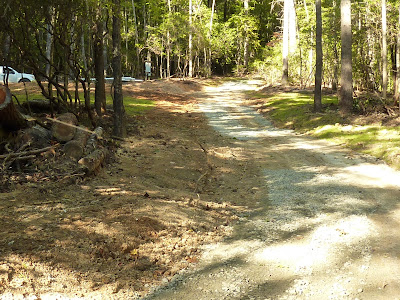 Another view of the lot's forest from just uphill of the house pad: 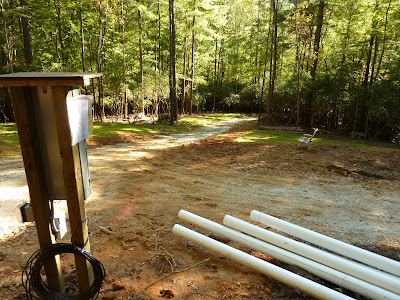 New look of the driveway entrance after application of the road bond: 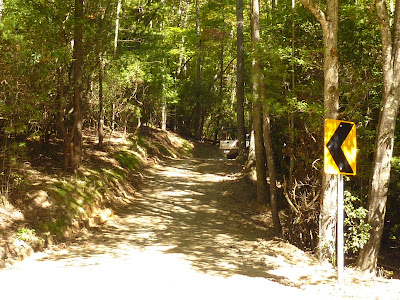