Why I Climb Trees

Back in the mid-1970s, I invented a way to climb large trees using lassos made of one-inch tubular webbing and cave rope ascending gear. The idea is to reach up as high as you can and lasso the tree trunk, cinch the webbing down tightly, then use a set of three mechanical ascenders to “inchworm” your way up the webbing to the knot of the lasso. Then reach as high as you can to wrap a second lasso around the trunk and do it all over again, then do it yet again with a third lasso. Next, remove the first lasso and use it for a fourth, still higher wrap, and continuing on use the second lasso for a fifth wrap, etcetera, until you reach the canopy and can freely “monkey” around in the treetop branches. Thus, only three lassos are needed. Upon reaching as high as you dare to go, tie a fourth piece of webbing around the trunk, clip a carabiner onto it and thread a low-stretch rope through the ‘biner. The rope’s bitter end is already tied to the base of a second tree, and the hanging end of the rope is what you use to rappel back to terra firma.

Lately, I have discovered that several other cavers have also independently invented this method of ascending trees. The “wheel” keeps being re-invented.

I won’t describe here the caver’s ascending gear and ascension techniques because that is the subject of whole books that you can immerse yourself in for a looong time. Suffice it to say that, for safety’s sake, we American cavers always have at least three mechanical ascenders on the rope at all times, even though a single ascender is quite strong enough to support a person. A great weakness of the caver’s ascending system, however, is that although we have three ascenders on the rope, we have only the one rope; thus, we have a redundancy of three with ascenders but no redundancy at all with the rope. Needless to say, we take VERY good care of our ropes – don’t even think of asking to borrow our pit ropes!

So, why do we climb trees? An oft-cited reason is to construct a “rope stand,” that is, a standing rope that cavers can use to practice their Single Rope Technique, or SRT. Getting in and out of some caves involves rappelling into and then climbing out of rather deep pits up to several hundred feet deep. Rock climbers may climb solid rock like granite, but limestone is often called “rotten rock” for good reason, so cavers go up and down ropes, not rocks. SRT is not intuitive. It requires knowledge, patience and skill that only come from practice, practice and more practice. In addition, hanging in a harness constricts blood flow and pinch nerves, which can cause serious injury and even death if not performed correctly. Thus, conditioning is required in addition to practice.

Over the years, I have constructed several dozen rope stands in trees in my back yards and those of my friends. Frankly, climbing trees via lassos is slow and can be exhausting, so a more efficient method is to use a bow and arrow to drape a monofilament line over the base of a high branch, then use the monofilament to pull an eighth-inch line over the branch, finally using the latter to pull the rope into place. Disadvantages of this technique are that the lines and rope can saw through the bark, damaging the tree and getting tree sap on the rope. Pines make the best rope stands because they have a single trunk from which numerous horizontal limbs splay outward, making the canopy of a pine essentially a three-dimensional ladder; hardwoods are vastly inferior in that respect. But pine pitch is horrid on the rope. It can do serious damage to the rope and, because it gets on you and your gear, you get all hot and icky. Ugh! Everything is a trade-off. Sometimes we use the bow and arrow and sometimes the lassos.

My house lot in NC has several tall white pines (Pinus strobus) suitable for rope stands. Since much of my time recently preparing the lot for house construction was spent in waiting on contractors to show up, I decided to invest some time setting up a rope stand. I chose a hundred-foot tall pine about 75 ft downhill from the house pad and set to work using the webbing lassos. After a half-day of exertion and pinched arteries and nerves, I had climbed only about 30 ft up the tree. Part of the reason I was unable to ascend higher was because I was sawing dead limbs away from the trunk as I went, but using the webbing involved a lot of knot tying and re-tying, plus cinching myself closer to the tree so I could reach higher to wrap the next lasso, plus having to use not three but four points of attachment. The following pics do not really give the uninitiated a full grasp of the system but should imply how sloppy and complicated it is: 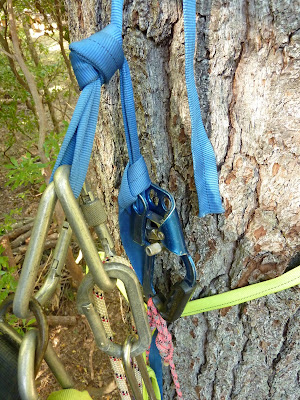 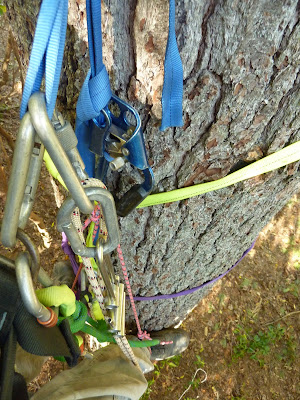 “There had to be a better way,” I thought, as I tucked myself into bed for the night. Visions of webbing and SRT danced in my head as cramped muscles failed into flaccidity. Then suddenly it came to me! “Why not use rope instead of webbing?” Rope is stiffer and easier to throw around the 3 ft diameter trunk, rope holds the ascenders in place more sturdily than slick, flat webbing, knots are easier to tie and untie in rope and rope tangles less than webbing. Excited about this epiphany, it took another couple of hours before I finally was able to fall asleep. I kept going over and over in my mind how my techniques would change.

The next morning, I cut three 16 ft long pieces of rope and turned them into lassos, and using them found them to be indeed a far more elegant solution. The fourth point of attachment was needed only momentarily, fewer knots were needed and never needed to be re-tied, ascenders never slipped or got snagged, rope lassos never tangled or got in my way and I was able to do away with cowtails and carabiner cinches. Although this photo (again) does not give you a full picture of the technique, it does show how much simpler the new method is: 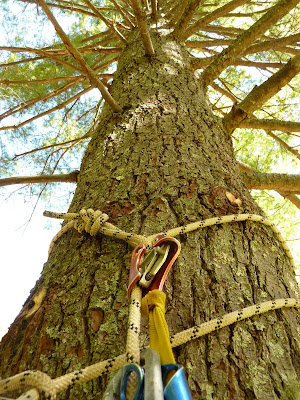 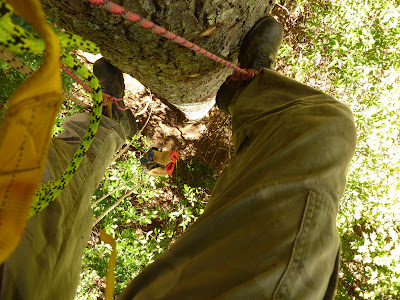 While I climbed only another 30 ft the second day, again largely due to sawing off dead limbs plus having to work out the details of the new rope lasso method, it took an hour less time and I was not nearly as tired as at the end of the first day. I stopped at the base of the canopy where limb whorls are about 2 – 3 ft apart, almost to the point where I can free climb without having to use the lassos or have to cut more than a few additional dead limbs. I should be able to reach the top of the tree in only a few hours the next time I go out and play.

There are other reasons I like to climb trees. American scientists working in Costa Rica back in the 1970s were featured in an issue of Smithsonian Magazine roping their way around the Monteverde cloud forest canopy. Their research turned up interesting features of natural history new to science that fascinated me, and this in fact was the catalyst that precipitated me into exploring the canopies of Florida’s forest giants. I studied their photographs intently, trying in vain to figure out how their kit was composed, so invented my own from scratch. They learned, for example, that epiphytes on treetop limbs form a web of stems and roots that trap leaves, sticks, vines and the feces of insects, mammals and birds. Epiphyte roots penetrate tree bark, breaking it off and incorporating it into the rich organic matrix. The trees themselves then send their own roots into this mass to sip its moisture and sup on its nutrients – the trees had roots at both ends! Inspired, I climbed trees in Florida and discovered similar epiphytic mats with roots from host trees of red maple, Southern magnolia and swamp tupelo.

Other large trees I have climbed include live oak, winged elm and bald cypress. I have sat on brontosaurian limbs of live oaks a hundred feet above the ground, swaying in the breeze while eating sandwiches and sipping red wine, laughing at wide-eyed blue jays astonished to find me amongst them. I have ascended to the top of a bald cypress 80 ft high and 4 ft in diameter at that height, broken off by a hurricane long before, and looked down through its hollow trunk onto an abandoned bear den. I have found trails atop canopy limbs through epiphytic resurrection fern “lawns” that were created by gray squirrels, opossums, raccoons and cotton mice. I have come face-to-face with a yellow rat snake staring out of a trunk den, fat with four lumps in its gut. I have been startled by a family of raccoons, a mom and her four young-uns, emerging at dusk from a cavity high in a live oak, first to pee and then to scuttle down the trunk to forage for the night. I climb trees for many reasons.
Posted by Buford Nature at 1:35 PM