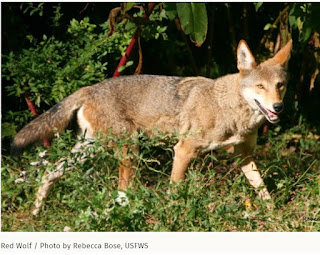 Kimo Brown’s story today on Facebook (http://tinyurl.com/y6rxenfs) of his encounter with mustangs and rez dogs during morning yoga reminded me of a similar experience I had at Padre Island National Seashore off Corpus Christi, Texas, I think in the 1980s. It happened when a client organized a workshop attended by several members of our environmental consulting company, another consulting company, local university scholars, and state and federal agency staff. The group was primarily composed of wildlife biologists.

We met daily at the university over a week, did our workshop thing, and then retired at the end of each day to a local pub for chips, Tex-Mex salsa, and beer. Problem was, there was one big round table that most of the group sat at, but it wasn’t big enough for us all, so I wound up at a smaller table with grad students. The Big Table continued to talk about the project, but the grad students only talked about school funding inadequacies. After a couple of days of barroom boredom, I decided to investigate the Padre Island wilderness.

I drove across the causeway and parked, walked the seaside trail to a fine Seton spot, and sat down in the atmosphere created by wind in the sea oats, Gulf of Mexico small surf, and colorful sunset. I was totally alone. Despite the thriving city only a few miles away, I was the only person in the coastal barrier landscape.

The first evening I was there, and almost as soon as I sat down, Eastern Meadowlarks began singing. Theirs is a relatively monotonous, strident and reedy song, but I grew up with it in North Florida and find it familiar and comforting. This lasted for about 15 minutes. Afterward, there was about a five-minute interval carrying only the sounds of the breeze and the sea, and then Western Meadowlarks began calling. Their songs were far and away more melodious than their Back East brethren. It was my first experience hearing this species, and I was enthralled. I listened to it until they ceased singing, finished watching the sun go down, and drove back to the motel.

The second evening, I again went to that sweet spot and waited for the meadowlark opera to begin. As I sat there, however, I got the strange feeling that someone was watching me despite mine being the only vehicle in the parking lot. Turning around to investigate, I saw three large canids about 20 feet away staring at me from the sand dune ridgeline above... three pairs of wild, yellow eyes evaluating this lone potential prey victim sitting in a most vulnerable position. Not daring to even gulp, much less budge, I stared back. Two of them then turned and nonchalantly trotted away, but the third continued to meet my gaze for a moment longer and then also slipped off.

These animals were the size of large German shepherds, but the grad students the next day concluded I had merely seen coyotes. However, I have seen coyotes Out West and in the Southeast, and individuals of both populations are significantly smaller than shepherds. Furthermore, there was a small population of red wolves on that island back then. Perhaps I did just see coyotes, but the coyote is descended from wolves and their hybrids are fertile, so I prefer to believe that I saw wolves. Whatever, after they left, I listened again to the meadowlarks. East meets West sometimes inscrutably.

Posted by Buford Nature at 2:28 PM