I am in west Florida surveying for gopher tortoises for the next several days. I drove to a tract and discovered it is a pasture containing a small herd of longhorn cattle. I have heard that longhorns are fairly docile as far as modern aurochs go, but their horns are 4 ft or more from sharp tip to razor tip, so I was not happy about having to survey the field on foot. When cattle, and especially bulls are around I really, really want my truck as a handy escape module. Some phone calling produced the key to the gate, and after working amongst them for a while, I discovered that the longhorns were really quite docile. So far, anyway.

After working until almost dark, I had noticed a couple of cows braying somewhat insistently, but paid them no mind. When driving up the hill to the gate, I realized the two were bulls, not cows, and one of them was in MY pasture at the fence about 50ft from MY gate. The other bull was on the other side of the road in another pasture. The two bulls were challenging each other, and not just by mooing loudly but also by snorting, pawing the ground, pushing against their respective fences and looking quite wild-eyed. Fifty feet away is not a lot of feet away from a mad bull.

I thought better than to drive straight up to the gate because I figured my bull might take it as a direct challenge and either charge the truck or just come over and skeer me into staying in the truck all night. So I drove wide around the pasture and snuck up to the gate from the far side and stopped. So far, so good. I then slowly, quietly opened the truck door and just as I stepped out to open the gate my bull turned 135 degrees and stared straight at me with fire in his eyes. Gulp. I got back in the truck and waited. Fortunately, the bull did a bit of mental weighing... Buford... the other bull... Buford... the other bull... Aaaah, screw Buford... Then he turned back toward the other bull and continued his testosterone testiness. 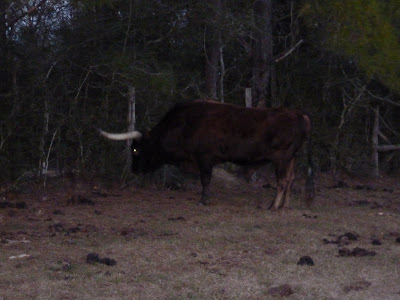 Taking another chance, I slowly got out on the OTHER side of the truck and snuck over to open the gate just wide enough to get the truck through it. Meanwhile, two longhorn femmes with horns THIS WIDE stood a bare dozen feet from me, gently chewing their cuds as though to ask, "What's the matter? The bulls won't bother us girls." Stinking cows. Anyway, I made my escape and I hope they break their legs in a gopher hole. 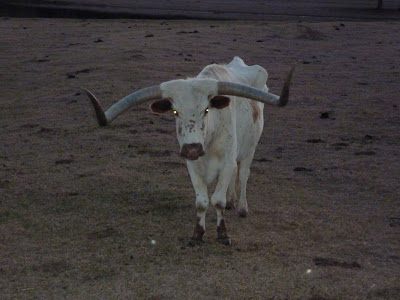